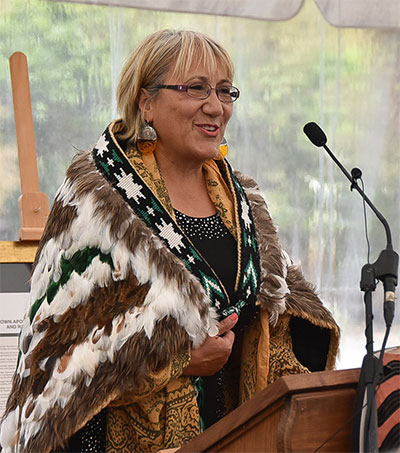 Mavis Mullins runs a sheep-shearing company that handles over 1,000,000 sheep. She’s also a charming, disarmingly honest straight-shooter. One day her cousin pulled her into a café with a request: Help us fight with the New Zealand Government for reparations. NPR hosts Kenny Malone and Darian Woods follow Mullins through the reparations process in a recent ‘Planet Money’ episode.

“Over the last 35 years, the New Zealand government has spent billions of dollars to build a system to address those unthinkable wrongs and to try and actually pay for them. Today on the show, we head to New Zealand to see how it works. And to hear what it’s like to put a price on history, we ask Mavis Mullins,” Malone begins.

“In New Zealand, there are two main islands. They stretch about a thousand miles in total. And if you kind of zoom in on the bottom part of the North Island, you’ll land here, on a small mountain that Mavis Mullins knows as Pukaha,” Woods says.

“Mavis’ ancestors had gotten everything from this vast swath of forest, and almost all of that forest was chopped down when the land was sold to white settlers. In fact, there’s really only one big chunk remaining now,” he says.

“Pukaha is all that’s really left of the forest. This is the last real remnant that’s in one piece,” Mullins explains.

“Pukaha is the last real place where Mavis can go to see and feel and hear what her ancestors would’ve experienced. But infuriatingly, it was no longer controlled by Mavis’ iwi. Pukaha fell into government ownership. And to add insult to injury, for all of Mavis’ life, New Zealand maps did not use the name Pukaha,” Malone says.

“So instead of compensation,” Malone explains, “it is widely understood by Mavis, by others that what’s happening here is, quote, unquote, ‘redress’ – as in a package of money and land that is a tiny fraction of what was actually taken from Mavis’ iwi but still large enough to help them rebuild.

“In the end, the government conceded quite a bit. That initial $10 million package tripled. Mavis’ iwi wound up with $32.5 million worth of money and land, including, of course, Pukaha/Mount Bruce.”

Mullins says she was “satisfied”, but her uncle says he thinks they got a “rough deal”.

“And I don’t disagree with him,” she says. “But the settlement was, I felt, the best we could do with what was in front of us and offered.”

“The third and final part of each settlement is something that bureaucracies are notoriously bad at – apologising, as in actually showing up and saying, we are sorry,” Malone says.

“And what was being planned was that a group of government officials would come to Mavis’ hometown,” Malone explains. “They’d set up a massive tent. It would be packed with hundreds of members of Mavis’ iwi. The treaty negotiations minister, Barker’s boss – he would step up to a podium. And then, after 175 years, the Crown would officially apologise to Mavis’ iwi, Rangitane.

“But we received the apology draft, and I got it on the email. And I sat alone in this hotel room, reading this apology, and just cried. All of a sudden, there’s a document that says, we acknowledge that we did this. Unreserved sorry for all of this. Even now, it still creates reactions in me,” Mullins says.

“The Crown is deeply sorry for its many breaches of Te Tiriti o Waitangi – the Treaty of Waitangi – and its principles and for the effect that these breaches have caused to generations of Rangitane o Wairarapa and Rangitane o Tamaki nui a Rua,” she reads.

“I just think New Zealand is incredibly brave to even play in this space because it’s so much easier just to shut the box and, you know, carry on. Even if it is flawed, even though it’s crap and frustrating, it’s – for me, it’s a journey of building something,” Mullins says.

Photo by New Zealand Office of the Governor-General.