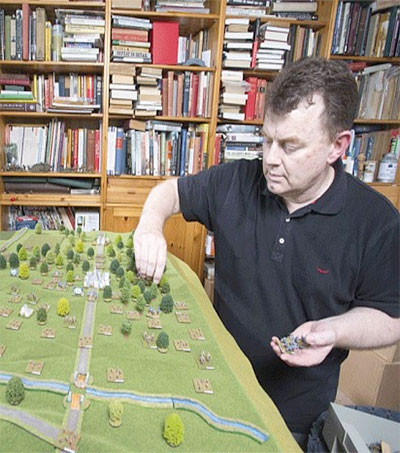 Inspired by the war stories of his grandfather, war-gaming enthusiast Robert Dunlop, a New Zealander living in Britain, has collected thousands of miniature soldiers to recreate the Battle of the Marne in France 100 years after the first major turning point of the First World War.

The battle, which changed the direction of the war, will now be relived in vivid miniature detail by Dunlop, along with a dozen of his friends and over 10,000 small figures, each only about 6mm tall.

“As a young boy I would sit at my grandfather’s feet and he would talk about the war but he would always talk in the third person so there was something there that was terrible that he found difficult to talk about,” Dunlop says.

Five years of meticulous research and planning by Dunlop has now brought the Battle of the Marne back to life in a chateau in Dormans – a small French town in the centre of where the original conflict raged for a week in 1914. Spread throughout three huge stately rooms in the historic 17th century chateau the exact rolling topography of the original Marne battlefield, which sprawled across 40 miles of countryside Northern France, was recreated across three huge tables.

Once he has fought the Battle of the Marne, Dunlop intends to recreate other key encounters in the war such as the Somme and Passchendaele. Dunlop believes that by recreating these battles in miniature he can help to burst some of the myths that it was “lions led by donkeys” that fought the war.