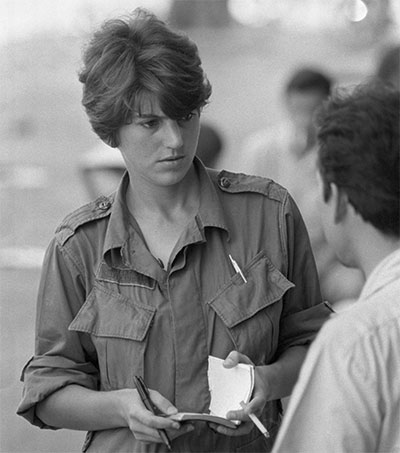 She was sitting on the steps of her hotel, in the middle of Saigon, when the military jeeps zipped by, headed toward the sound of gunfire. So that’s where Kate Webb headed, too. “I left my steel pot [helmet] in the car,” the New Zealand-born war correspondent, then 24, would later write. “I wish I hadn’t.”

What Webb found when she arrived at the American Embassy in those early morning hours of 31 January 1968, was chaos – a violent raid by Viet Cong guerrillas on the newly constructed building, perhaps the most visible symbol of the US presence in South Vietnam. The audacious attack was part of the Tet Offensive, a massive military campaign orchestrated by the North Vietnamese that, though it failed, would cripple the American public’s already waning support for the war.

For Webb, though, the embassy assault was a seminal moment in what would become a legendary career.

Webb was the first journalist from a wire service to reach the embassy that day, and her brief first-person account, soon published in newspapers across America, was among the most memorable pieces of writing that emerged from the war in that historic year.

Her haunting description of the scene, and her most poetic turn of phrase – “like a butcher shop in Eden” – has often been quoted in the decades since.

While reporting from Cambodia in 1971, she and five others were captured by the North Vietnamese.

As a prisoner, she wrote, “you are not among the living or the dead of the war, but trapped in a grey twilight with no links to the living world.”

After 23 days, Webb was released, but not before the New York Times reported she hadn’t survived: “Straight from the grey, almost silent limbo into, in my case, the glare of TV lights and a bizarre mixture of fan and hate mail, it was doubly bizarre for me, as I found that I had been reported killed, a body had been found and ‘identified,’ my family had held a memorial service for me, and I read my own obits.”

None of the trauma, though, stopped Webb – whose account of her time as a prisoner is being made into a movie – from continuing to work in the most dangerous places on Earth.

After her death in 2007 at the age of 64, a Straits Times reporter who had met Webb in 1970 recalled a speech she had given years later, looking back on her life.

“People always think I must be so tough to survive all this,” he recalled her saying. “But I’m a real softy. Maybe that’s what it takes – you have to be soft to survive. Hard people shatter.”