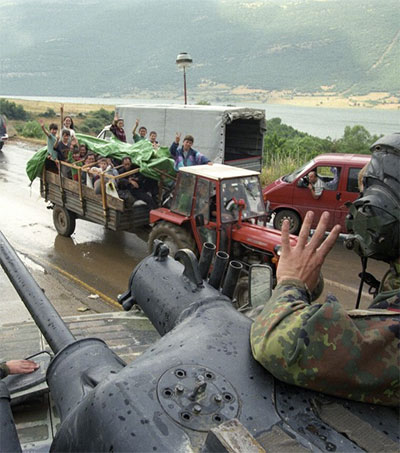 New Zealand-born Wade Goddard’s new book, The Kosovo War captures the raw suffering of the conflict – but the veteran Balkan war photographer also tried to find courage and hope amid the bloodshed.

In Goddard’s imagination, Kosovo is still fixed as a picture of bodies of murdered children lying on the wet ground – an image that appears in his new book, which was published last month.

In his photographs, Goddard, 49, portrays the bitter tragedy that many Kosovo Albanian families went through during the 1998-99 war, and the effects of the conflict on their lives and feelings.

But Goddard never imagined that his passion for photography would lead him to capture a series of wars, until one day he glanced at the cover of a magazine featuring images of the conflict-scorched Croatian town of Vukovar, which was besieged and destroyed by Belgrade’s forces in 1991.

A city of ruins and roads filled with bodies of murdered people haunted his thoughts and caused him to journey to Yugoslavia in the midst of its bloody dissolution.

At that time, the 22-year-old New Zealander was unemployed and had no professional experience.

“I never thought I would work on the battlefield. I contacted a photographer to ask him how to get there. I came for one month but I stayed in the Balkans forever,” Goddard said.

Goddard believes that his pictures from Kosovo keep alive the memory of the people who died.

“We always hope that such images can cause public awareness and may put some pressure on decision-makers. At least we did what we have to do. We recorded some terrible moments and we tried to shed light on the truth,” he said.