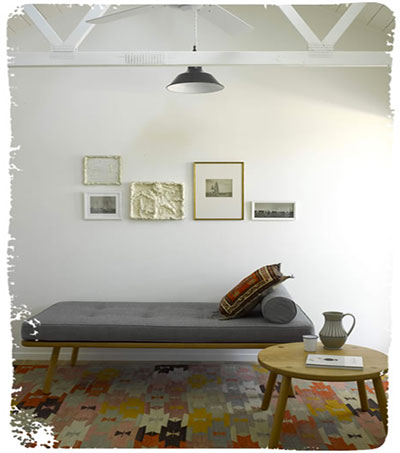 “(Waiheke Island) has its own microclimate – it’s drier and warmer than Auckland, 20km away – which is why it’s so good at growing grapes and attracting thousands of day-trippers,” Katrina Lolley writes for The Australian. “I arrive on the kind of day that makes you want to move countries. It’s also midweek, which means there’s room for me at The Oyster Inn, a micro-hotel that’s really a restaurant with rooms.

“The inn, occupying a site that was once the island’s newspaper office, channels a casual yet luxurious beachside vibe. The upstairs restaurant and a downstairs boutique occupy the street frontage while three stylish guestrooms are tucked behind a door.

“Everything about Room One makes me want to move in on a more permanent basis. I adore the soft merino throw draped over the kingsize bed and the stack of books at its foot, the oversized Aesop toiletries and the sunny yellow-white striped beach towels. These memorable touches are no surprise, given the owners’ backgrounds in hospitality and haute fashion. Jonathan Rutherfurd Best used to throw high-wattage celebrity parties around London while his partner, Andrew Glenn, once worked for Louis Vuitton.

“Both have strong local roots. Rutherfurd Best was born and raised on the North Island while Glenn, who has a New Zealander father, grew up in Hong Kong. After falling in love with Waiheke, they wondered how they could fashion new lives here. A gap in the dining scene – “No one was doing seafood,” Glenn says – prompted them to open The Oyster Inn in 2012.

“On another day, I lunch at Mudbrick Vineyard and Restaurant, where diners gaze across European-style clipped gardens to Auckland’s skyline. Of course, word is well and truly out about multimillion-dollar views like these. A savvy visitor books beds and tables on Waiheke well in advance or visits in off-peak times.

“With so many pleasures at hand, it’s easy to see why some visitors start dreaming of owning a piece of Waiheke (or a section, to use the local parlance).”

Original article by: Katrina Lobley, The Australian, May 13, 2017