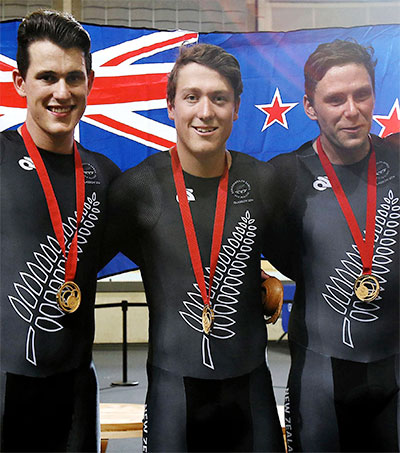 New Zealand has started its 2014 Commonwealth Games campaign with a bang winning three gold medals at the Sir Chris Hoy Velodrome in Glasgow.

Aucklander Sam Webster (pictured, centre), 23, sprinted his way to New Zealand’s first ever Games gold in the men’s sprint, having won gold alongside Ethan Mitchell, 23, and Eddie Dawkins, 24, on opening night in the men’s team event.

Webster had been clearly the best rider throughout the competition, beating England’s triple Olympic gold medallist, Jason Kenny. In victory, his momentum swept him around the track and he pumped both arms in the air. He pointed to his parents. But “I was not feeling good,” Webster said. Such is the mental tax of this race, the body utterly spent after less than a kilometre’s ride, not even half of that at top pace.

He had won the battle of the mind. “You’ve got to be quick on your feet in these races,” he said. “You can’t have a concrete plan. But I was pretty happy with my fluidity and adaptability.”

Webster is the first non-Australian to win the men’s sprint event since 1966.