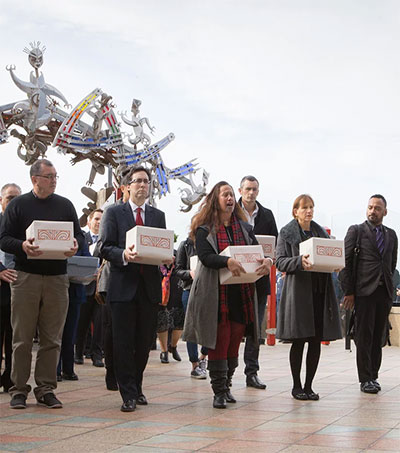 US Returns Remains of 54 Indigenous People to NZ

Four mummified Maori heads have been returned to New Zealand, following five years of negotiations with the Smithsonian Institution in the United States. The objects are part of the second-largest repatriation of indigenous remains in the country’s history, the Guardian reports.

The institute has agreed to return the heads, made up of the remains of at least 54 Maori and Moriori individuals.

Descendants of the people whom the remains belong to were at Te Papa museum in Wellington to extend a powhiri.

Haami Piripi, a Maori elder and member of the repatriation team, said the return of the remains has helped to unite disparate Maori tribes across the country, some of whom had historically been at odds.

“Today one of the people being returned was one of my own ancestors,” Piripi said. “It is really a joyful occasion. It is meant to be grieving and mournful, but it is joyful. Our ancestors were whisked away in dubious circumstances centuries ago, and they are finally returning home, after a very long journey.”

As part of the repatriation effort, the remains of a further six individuals were returned from the UK and other US museums. Among them was a Maori child’s skull from Beneski Museum in Massachusetts.

The New Zealand government’s indigenous repatriation programme has secured the return of the remains of about 400 individuals since it was set up in 1990.

Dr Arapata Hakiwai, a Maori co-leader at Te Papa, said the remains would be stored in a wahi tapu within the museum, and, if possible, returned to the tribes around the country to which they belong for burial.

“When I am overseas, and I face a Toi moko, I speak to them,” Hakiwai said. “I say: ‘Look, I’ve come here to see you. I know you’re an ancestor, who lived amongst the mountains and the rivers. I want to take you home, to rest among your land and your people. In the Maori world, you still live.’”