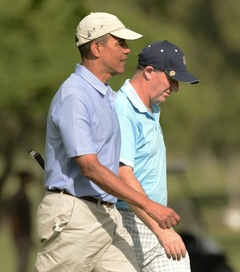 In a rare vacation encounter with a foreign official, US President Barack Obama played golf in Hawaii with a new partner, Prime Minister John Key also on vacation, along with Key’s teenage son Max and Obama’s White House aide Marvin Nicholson. The statesmen hit the green at Kaneohe Klipper Golf Course located on a US Marine Corps base on the northeastern coast of the island of Oahu.

The White House in a statement said the politicians have long talked about their shared interest in golf and enjoyed the chance to spend several hours together on the course.

“President Obama and Prime Minister Key have developed a close partnership, which reflects the friendship and broad cooperation between the United States and New Zealand,” it said.

“While the two leaders are both enjoying some time off with their families and friends, they also reaffirmed our continued work together to deepen our trade relationship, enhance regional security and support the democratic values that the United States and New Zealand share.”

Aside from Vice President Biden — with whom Obama has played golf six times — only seven other elected officials have shared the greens with Obama, Key being the first foreign elected official.

Obama and Key also share being first elected in their respective countries in November 2008.