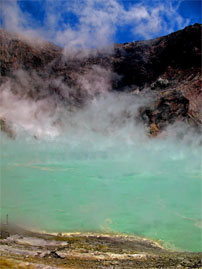 Upon A Breathing Planet

“Step into the volcanic crater on White Island, among the steaming fumaroles and geysers, and you’re instantly in a geothermal wonderland,” American journalist Jill Robinson writes for The Washington Post. “The hissing and bubbling sounds that surround you make it seem as if the earth is breathing right under your feet. It’s no Disney attraction. Just [48km] off the north island of New Zealand, this is a real volcano. White Island — also called by its Maori name, Whak?ri — is New Zealand’s only active marine volcano. Its age is estimated at 100,000 to 200,000 years, though the part of the island seen above sea level has appeared in its present form for only about 16,000 years. About 70 per cent of the volcano is below sea level.”