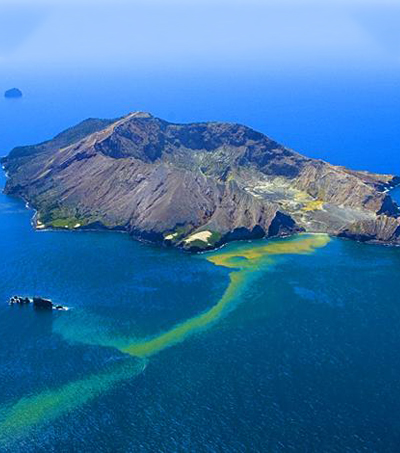 “A foul smell hangs in the air over White Island, a marine volcano in New Zealand’s Bay of Plenty, and steam hisses from rocks stained bright yellow from centuries of sulfur exposure,” writes Craig Hoyle for The New York Times. White Island is one of the world’s most accessible marine volcanoes and a popular tourist destination.

The active volcano, which is located approximately 30 miles offshore from the small coastal town of Whakatane, “has smoked continuously for centuries according to Maori lore”. There was one major eruption in 2000 and minor ones in 2012 and 2013.

“A guide distributed gas masks and yellow hard hats to the approximately 40 tourists on my trip, and warned them to stick to the track. Steam vents crack the surface in many directions and a misplaced step could release a blast of scalding air or even pitch the visitor into a newly opened crevice,” writes Hoyle.

“On this particular day, there was a stunning contrast between the bright yellow rock and the cloudless blue sky.”

“The island is little more than a mile in diameter, so it doesn’t take long to see much of the terrain.” The main attraction of the island is the “large crater complex, with a lake that is filled with a toxic mix of water, mud and gases (and was colored bright orange and yellow during my visit),” writes Hoyle.

White Island is privately owned. After changing hands through a number of commercial mining operators, Auckland stockbroker George Raymond Buttle bought the island in 1936. While he refused to sell it to the government, he agreed to have it declared a private nature reserve in 1952. Today the island is still managed by the Buttle Family Trust, as reported in the article.