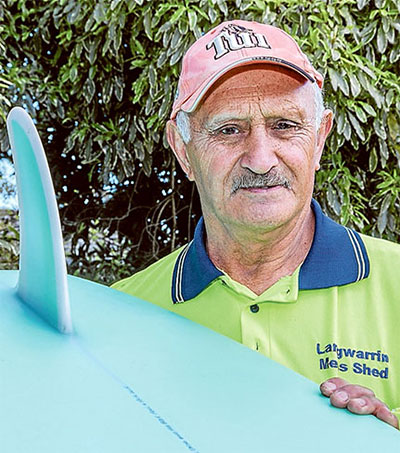 Tutanekai “Tui” Wordley should be an inspiration to every surfer. Not because of the size of the waves he rides or the latest overseas trip he’s made, but because, at 80, he’s still out there, catching the swells. A New Zealander by birth with a mixed Scottish, English and Maori pedigree, Wordley came to Australia by way of Papua New Guinea about “30 odd years ago”.

Now settled in Langwarrin, Melbourne, Wordley is at home on Western Port’s reefs and points and the beach breaks at Gunnamatta or Phillip Island with visits to the west coast, from Torquay to Lorne, when the surf is on.

Wordley was working in the PNG highlands as a motor mechanic when he met his wife Julie. She came from Heidelberg and seven years later, when it was time for them to come and settle in Australia, his one stipulation was that “it has to be close to the beach”.

A foundation member and the first life member of the Mornington Peninsula-based Maladiction Longboarders, Wordley made and operates a lighting system that signals information about heats to competitors in the water.

And although he’s the oldest Maladiction member, Wordley says “those other guys are catching up”.

The lure of surfing first hit Wordley when he was in his early 20s while living in Whangarei.

“We saw some guys come to our local beach with surfboards and we’d seen newsreels. The guys making Endless Summer came to Raglan to do some filming, which included trout fishing at Rotorua,” Wordley says.