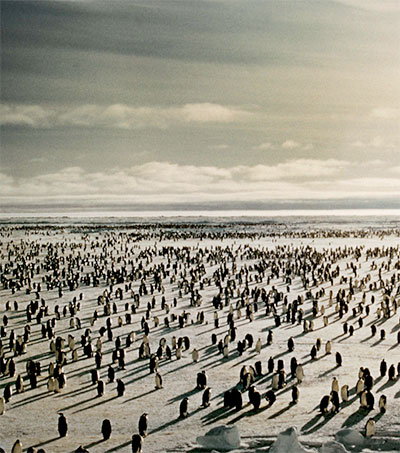 In the summer of 1957-58 New Zealander George Lowe was the 12-man Commonwealth Trans-Antarctic Expedition (TAE) team’s official photographer. He documented the treacherous journey in its entirety, juggling a number of cameras and shooting on 16mm cine film, medium-format black and white, and 35mm color transparencies.

Now, in The Crossing of Antarctica: Original Photographs from the Epic Journey That Fulfilled Shackleton’s Dream, out this month from publisher Thames & Hudson, a trove of unpublished images from Lowe’s archives are brought together for the first time.

On the centenary of explorer Sir Ernest Shackleton’s failed Endurance expedition come these awe-inspiring shots of the TAE’s ship, Magga Dan, smashing a path through ice; landscapes of snow punctuated only by flocks of penguins; and racy collages explorers made from prints of pinup girls.

Alongside written reflections from explorers and polar experts, like Sir Ranulph Fiennes and Peter Fuchs (son of TAE leader Sir Vivian Fuchs), Lowe’s photographs offer a humanising look at the since-deified explorers, depicting their beards of ice and feasts of tinned vegetables for Christmas dinner. It also gives readers a visceral sense just how raw and brutal the conditions were, something that can be hard to envision while comfortably close to the equator.

In addition to compiling his rarely-seen photographs, Lowe wrote most of the book, reflecting on his journey across the last unknown continent. But before he could see the project to completion Lowe passed away in 2013.