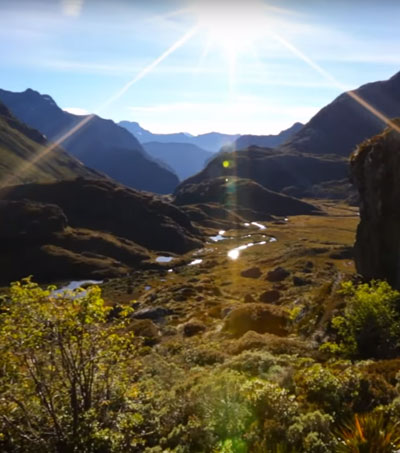 “As we took our first buoyant strides, we found ourselves in a lush green forest, adorned with carpets of moss, and surrounded by towering ancient beech trees,” writes Chuang.

After several hours “we reached the first hut at Routeburn Flats, set on a picturesque green valley fronting a languid shallow stream with a startlingly pretty backdrop of mountains.”

After a short picnic the group embarked on a “sheer brutal ascent, on jagged paths carved out of solid rock.” Shortly before 8 pm on the same day they reached Routeburn Falls Hut.

The next morning “we were surrounded by sheer panorama. Swathes of rugged rock formations were interspersed with freshwater tarns glistening with reflections of upside-down clouds. In the distance, the mountains soberly stood guard, their shoulders flecked with old snow from last winter,” writes Chuang.

On the next day the “we finally sighted enchanting Lake MacKenzie beckoning in the far distance below us. We descended below the tree line and into another world” – into Fiordland, writes Chuang.

“From beech forests to sub-alpine meadows, from waterfalls to lakes, soaring mountains to jaw-dropping vistas, this place has it all, and more,” writes Chuang.