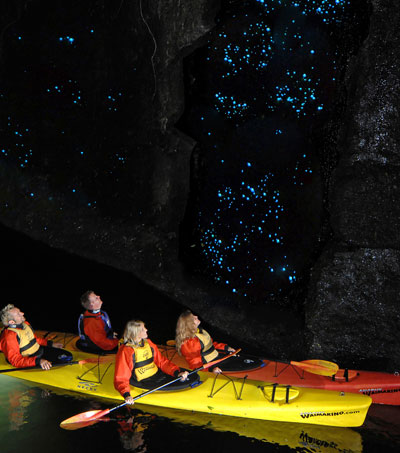 Traveling duo Stoked for Saturday has captured an incredible video of glow-worms in New Zealand’s Waitomo Caves.” The travel bloggers shared how it all came together with National Geographic’s Sarah Polger.

When asked what inspired them to make the glow-worm video, blogger Jordan Poste replied:

“My first experience with glow-worms was shortly after we arrived in the country and a local took us to a secret spot by the river with some glow-worms scattered against an embankment. I wasn’t actually inspired to make a glow-worm video until I was already partway done.”

He told National Geographic that his first attempt to capture the glow-worms was so bad, that “drove him” to try again.

“Each photograph was approximately a 30-second exposure and I used a total of 80 seconds of glow-worm time-lapse video at 24 photographs (frames) per second. That means I had to take almost 2,000 photographs of glowworms to create the video.”

Poste said that photographing glow-worms had “many of the same challenges as astrophotography with a few extras like constantly dripping ceilings, rivers, and the risk of even the smallest light source ruining your shot.”

Another challenge he experienced were New Zealand’s eels. “Eels are in almost every freshwater river in New Zealand and they can grow to be very large. It also doesn’t help that they will bite you if you give them a good opportunity,” he said.

When asked about the next destination on his travel photography dream list he said:

“I have unfinished mountaineering business in New Zealand, which includes getting some drone photographs from on top of summits like Mitre Peak. Outside of that, my hit list includes Nepal, Patagonia, Greenland, and Iceland.”

Passages from a book of Katherine Mansfield’s letters published in 1918 helped a condemned British operative survive her death watch in the German concentration camp Ravensbrück. Odette Sansom, the most highly decorated…