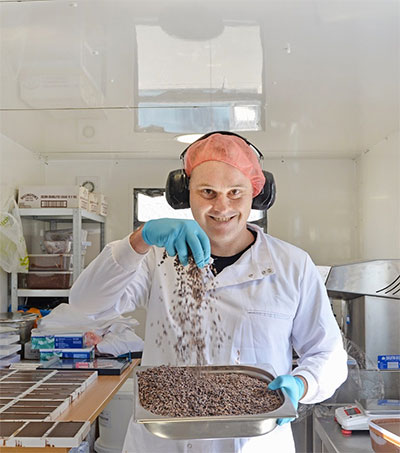 Robson, a former immunologist, has combined his scientific background with his love of chocolate to help create the guilt-free bars, Armstrong writes for the news publication.

He said: “Initially I started off as an immunologist a few years ago and a serious back injury basically made me rethink my career structure.

“I’ve always loved nutrition. I’ve always liked chocolate so what we decided to do is try and re-invent chocolate – adding a few scientific twists into how we make chocolate.

“We take really high quality cocoa, take out half the sugar that’s normally put into milk chocolate and we add in lactose-free whey protein from milk. We grind it for four or five days so it’s nice and smooth. That means our final chocolate bar has about 50 per cent less sugar than you find in a standard chocolate bar. Also, all our milk chocolates have 25 per cent protein in them.

Together with his colleague, Alan, the duo has recently started working on a matcha Japanese tea-flavoured chocolate, but their latest creation – a ‘peanut power’ bar, which is 100 per cent plant-based, is already receiving rave reviews.