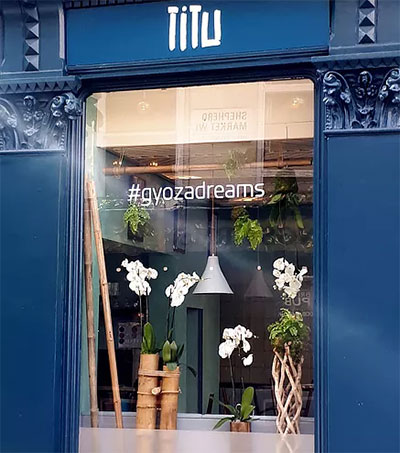 “I wasn’t really expecting Titu to be that good,” Hayward begins. “Jeff Tyler had been successful as head chef at the stupendously luxe Russian restaurant Novikov in Mayfair, but opening what was billed as a ‘gyoza restaurant’ seemed a gimmick too far. I mean, seriously? Gyoza? Those dinky little micro-pasties served as bar snacks in Japan? I think not.

“Even so, there’s something seductive about Shepherd Market at lunchtime. You go under the Curzon Street arch and fall through a wormhole into a place miraculously full of neat little independent restaurants. The people are booted and suited, and seem to represent a lost tribe of raffish survivors – ‘The Crust on its Uppers’.

“Titu occupies the prime corner spot, with its 15 packed-in seats.

“Gyoza are cooked flat-side down in a frying pan, bathed to about hip height in water or stock. The liquid boils off, steaming the dumplings, until the pan is dry and the undersides fry. The excess starch from the steaming forms a crisp, transparent pancake across the bottom, so each serving, flipped on to a plate, looks like a browned gossamer doily, draped over several small crimped crescent dumplings.

“First up was ‘Chicken + Cheese’, which I chose because it sounded like a combination you’d get at TGI Fridays and I thought it might make a good gag. Wrong. The chicken seemed hand-chopped, tiny flecks of fresh herbage lightened everything and plump little nuggets of something that could have been a great Gruyère spread their nutty creaminess throughout. Tyler understands balance like a unicyclist in a snake pit.

“The [‘Chicken + Foie Gras’] was a brilliant, ridiculous hybrid: a Japanese dumpling with an old-school French stuffing made by a New Zealander who has spent five years cooking for Russians … God, sometimes I just love London.

“Titu is a rare thing. It’s a tiny space that feels like it’s been gorgeously romantic in about 200 incarnations since 1850. It’s also got a seriously talented chef who seems to want to create unique food that makes people happy. And that’s kind of heart-warming.

“And to me, the crusty-hearted old cynic who only went because he thought Titu would be amusingly pretentious, it was a genuine joy to discover that it was precisely the opposite.”

According to the Titu website, Tyler “rose through the ranks of Huka Lodge’s award-winning restaurant [in New Zealand]. It was here he was first introduced to Japanese cuisine. At 18 years old and willing to learn more, Jeff took the opportunity to move to Japan to work, an experience he later described as the greatest challenge of his life so far. An impressive CV boasts experience at Roka, The Mandarin Oriental in Marrakech and Barcelona, and more recently as the opening head chef at Novikov London, Moscow, Dubai and Sardinia.”