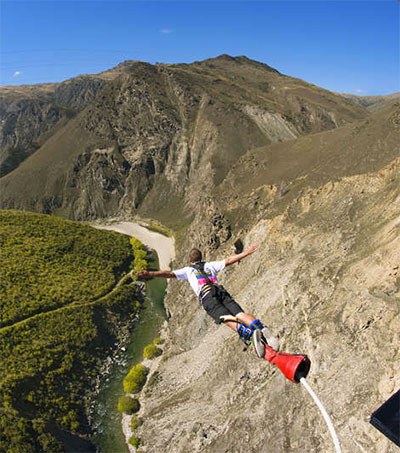 Thrilling Start to 2017 in Queenstown

Queenstown and its reputation as the adventure capital of the world, is a centre for every kind of extreme sport imaginable – but it is best-known for bungee jumping. New Zealand is included in the Guardian’s “hot list” of “Where to go on holiday 2017,” where “there is quite a buzz around [AJ Hackett’s] new attraction, due to open early this year.”

“AJ Hackett and Henry Van Asch set up the world’s first commercial jump, a 43-metre leap off the Kawarau ridge, in 1988, and more than 350,000 people have since taken the plunge,” the newspaper reports. “There are now AJ Hackett outposts around the world, and three sites in Queenstown, including Nevis Bungy, New Zealand’s highest at a terrifying 134m.

“Details on the Nevis Thriller are scant: it will be a world first, it will combine height, speed and flight, and it will give “the sensation of gliding akin to what a base jumper might experience”, according to the patent application. The government has invested $500,000 in the ride. Reports have speculated that it combines a zipline and bungee – but whatever the truth, it’s bound to be another big draw for adrenaline junkies.”

Original article by The Guardian, January 2017.