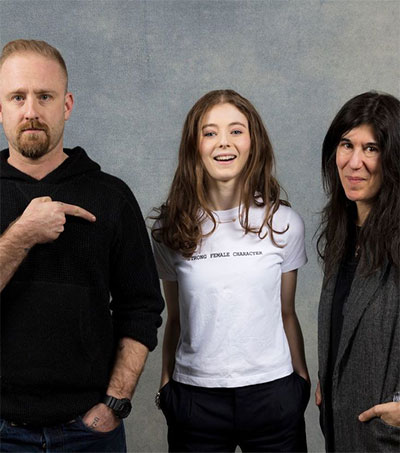 Leave No Trace had its world premiere as part of Sundance’s Premieres section and by the following day, Sony Pictures Worldwide Acquisitions had acquired nearly all international rights for the film.

The film opens with Will (American Ben Foster) and his 13-year-old daughter Tom (McKenzie) living in undetected isolation in a vast park on the edge of Portland, Oregon, their days mostly filled with the essentials of survival. When they are discovered and brought in by authorities, their connection to each other becomes strained, as Tom starts to feel a pull toward community while Will’s inner conflicts push him further and further away.

The film’s unvarnished, observant style gives a platform to two riveting performances. Foster brings a humane warmth to his role while also tapping into a deep well of torment and sadness, while McKenzie is a fresh, exciting discovery with an enigmatically winsome screen presence.

In casting McKenzie, the Los Angeles Times asks Granik if the success that Jennifer Lawrence had following Winter’s Bone caused her to feel any extra pressure this time.

“In order to drill into my work, I have to stay in a tunnel, I almost have to be a little reclusive, to be honest, and let that do what it does. And always tune into who would be an interesting collaborator for this project,” Granik says.

“I was looking for a teen woman who was going to do a good job in this film. I don’t have to apply that rubric at all, I don’t have to say, ‘Am I looking for the next Jen Lawrence?’ Instead I’m saying let me sort through these talented and aspiring young women and see who seems right for this project, is game for this project. And wasn’t too urban. That was a big problem. This was a rustic situation, people might get really muddy. That mud, those chapped hands that Tom had is the result of using that knife in inclement weather. She’s stoic. I’m very attracted to stoic people.”

The Hollywood Reporter named Wellington-born McKenzie one of the five breakout stars of this year’s Sundance Festival.

McKenzie, whose mother is actress Miranda Harcourt and father, director Stuart McKenzie, has previously appeared in The Hobbit: Battle Of The Five Armies as well in Shortland Street as Pixie Hannah.

McKenzie is a Year 12 student at Samuel Marsden Collegiate School.