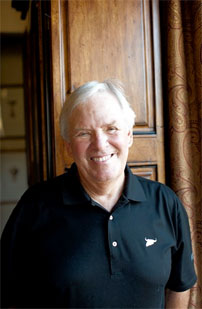 This Country is Why

Bill Foley, American businessman and owner of Marlborough vineyards Clifford Bay and Vavasour, visited New Zealand more than 10 years ago and fell in love with the landscape. Foley also found some good deals: New Zealand vineyard owners overplanted during the boom years, and when the price of grapes dropped precipitously recently, Foley was there. He closed on New Zealand Wine Co. just two months ago – a company with brands that include Grove Mill, Sanctuary and Froghaven. Why New Zealand? He offered a country-by-country rationale: Australia had a bad exchange rate. Italy was “too hard to figure out,” and in France, he had been offered “a bunch of domains” but “none felt right.” Spain was a “nonstarter,” and in Argentina, the problem was an unstable government. Ditto Chile. And South Africa? “Unstable government and bad wine,” Foley said.
(12 October 2012)