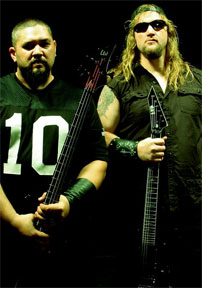 These Cats Kick A**

New Zealand heavy metal band Legacy of Disorder are an “exception” to the “formulaic” and “pointless growls” of the last decade or so according to the Examiner’s David Garlow. “This band has parts Pantera, parts Maiden, a hint of Corrosion of Conformity, with a little Anthrax and early Metallica thrown into the mix,” Garlow describes. “In other words, when I was sent the press kit, I can’t turn it off. These cats kick a** and then some. As evidenced by their new release, Last Man Standing, it is only a matter of time until Legacy of Disorder takes their rightful spot alongside the top modern day metal acts.”