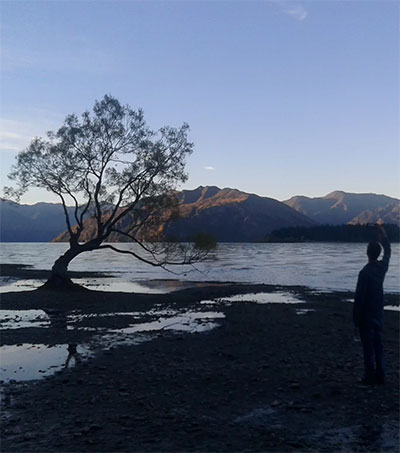 A crack willow tree, believed to have grown from an old fence post, has been photographed tens of thousands of times, with queues of photographers routinely forming on the lake’s shore to capture its beauty Lake Wanaka, the Guardian reports.

Now referred to as #thatwanakatree on social media, the tree – which is technically a weed – has a dedicated Facebook page, features in tens of thousands of posts on Instagram and often attracts hundreds of tourists at sunrise and sunset.

Local historians believe the tree formed out of an old willow fence post, which was used by Wanaka sheep Station to keep stock out of the village.

“I have lived here for decades and everyone ignored the tree until a few years ago, when it became something on tourists buckets lists to photograph, there are 40 cars there today,” van Reenen said.

On Instagram people pose naked beside it, have their wedding photographs taken in front of it or meditate beneath it.

Tim Errington, Queenstown Lakes District Council’s arborist, said the willow’s health has begun to suffer because of the overwhelming attention.

“The tree isn’t very healthy, it hasn’t grown much. Partly because of the number of people who climb on it, and partly because it is drawing few nutrients from the Lake bed, as it is usually submerged in water,” Errington said.