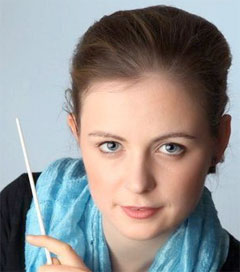 Wellington-born Gemma New, assistant conductor for the New Jersey Symphony Orchestra (NJSO), is directing three free-admission summer concerts at Mercer County Park, New Jersey. New has been conducting since the age of 15. She took up her post with the NJSO at the start of the 2011-12 season. “The NJSO focuses on serving the people of New Jersey, through performing many different genres of music for New Jersey’s diverse communities,” New says. “Our summer concerts give us a chance to reach out to a greater number of people in New Jersey and share our love of music with them. Prior to her NJSO appointment, New acted as a cover conductor for the ensemble, as she also did for the Baltimore Symphony Orchestra. This required her to learn all of the music both orchestras were to perform, in case a substitute conductor was needed. She was still working on her master’s degree at the Peabody Institute at Johns Hopkins University in Baltimore at the time. She was assistant conductor of the Peabody Concert Orchestra and made recordings of contemporary music with the Peabody Symphony. In addition, she founded the Lunar Ensemble – named for Arnold Schoenberg’s “Pierrot Lunaire,” a work that led to the formation of the group, after New directed Schoenberg’s loopy masterpiece at the St. Magnus International Festival in Orkney, Scotland. It was actually NJSO music director Jacques Lacombe who recognized New’s talent while she was still a violinist with the New Zealand Youth Orchestra. As the NJSO’s assistant conductor, she must be prepared to step in to lead concerts on very short notice. To this end, she attends all rehearsals and all NJSO performances. She studies scores and takes copious notes. She needs to be as comfortable in her knowledge of the music as any scheduled conductor. This summer, New is attending the Aspen Music Festival as a conducting fellow at the American Academy of Conducting. In 2012, New received the American Prize 1st place for orchestral conducting, and was selected by members of the Vienna Philharmonic to reside at the Salzburg Music Festival as an Ansbacher Fellow.