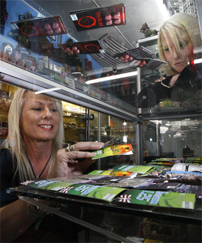 A 12-month ban of 43 synthetic cannabis products has come into effect in New Zealand. Some retailers believe that other legal highs will continue to flood a very popular, and lucrative, market. Manager of Auckland’s Hemp store Chris Fowlie says there will be ways for suppliers to circumvent the new regulations. “We already know that there are hundreds if not thousands of synthetic cannabinoids out there,” Fowlie says. Next year New Zealand’s conservative government plans to bring in comprehensive changes based on a review of the country’s drug legislation by the Law Commission.