NZEDGE  >  News  >  Arts  >  Superorganism Push Pop Into the Next Dimension 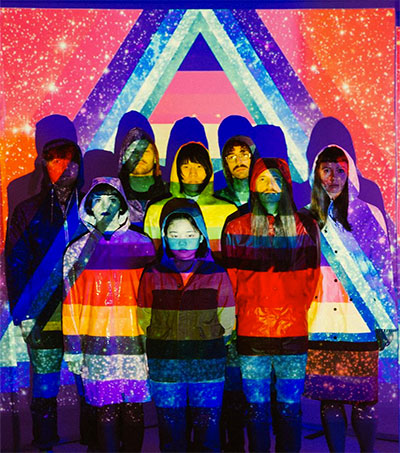 Superorganism Push Pop Into the Next Dimension

From secretive internet sensations to one of the most talked about new bands around, Superorganism’s hyper-modern approach to pop is propelling them further by the day. Superorganism, an eight-piece collective which includes New Zealanders Emily and Harry, talks with UK-based DIY music magazine.

“We have this WhatsApp group where we try and organise band stuff, but it’s just ruined by lolz. Destroyed by memes,” Emily says – one eighth of Superorganism’s intercontinental troupe, a hyper-positive multi-instrumentalist with the most infectiously upbeat personality around, DIY’s Lisa Wright reports.

More than any other emerging band right now, Superorganism is a product of the internet. Practically, following an initial meeting backstage at a gig, it enabled the octet to stay in contact across oceans and continents for 18 months before forming proper and, eventually, moving to London together. But more than that, its limitless possibilities lie at the heart of the eclectic new pop stars’ very essence.

From the genre-defying sonic blend that runs through the band’s three singles to date (low-slung, wavy breakthrough hit Something For Your M.I.N.D, the wobbly bounce of Nobody Cares and It’s All Good’s giddy hyperactivity) to the technicolour onslaught of cartoons and video game references that pepper the visuals of their live show, Superorganism are like a human Pinterest board – the product of a generation that has unrivalled access to everything, all of the time.

“Scrolling the internet, looking at Reddit or Instagram and just BAM BAM BAM – all these things constantly,” Emily agrees.

“You’ve got access to all of the sounds that you could possibly think of so you’re only limited by your imagination,” Harry continues.

Unencumbered by boundaries of genre or style, Superorganism are twisting traditional band life into their own thoroughly modern image and pushing pop into the next dimension. The future is now.

Superorganism plays at Botanique in Brussels, Belgium on 20 February followed by dates in Austria and Germany.