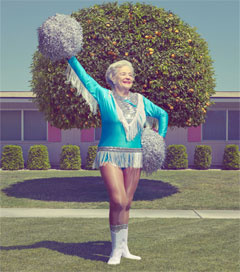 “Antony kept tabs on the area after he returned home [to London] and read about the Sun City Poms, a cheerleading squad of senior women who march and perform up to 50 times a year at conventions, parades, and sporting events.

“In 2013, he finally managed to get back to Sun City, where he created a personal series of 10 group and individual portraits of the cheerleaders. The images make a respectful statement about aging gracefully and optimistically – none of the Poms had performed as cheerleaders before the age of about 60.

“Antony says these women pushing back on societal norms offers an intriguing contrast to garish child pageants, where very young girls are encouraged to look and act older too quickly.”

Antony exhibited The Sun City Poms during February and early March at this year’s Circulation(s) in Paris, a festival for young European photographers.

Antony’s work was also featured in the December 2013 issue of Wired magazine, as part of an article on Abu Dhabi’s eco-city, Masdar.

He lives in London.