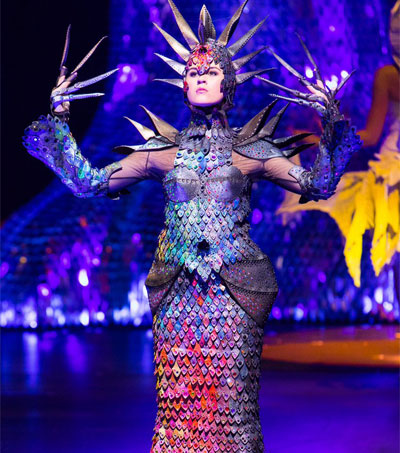 New Zealand designer Gillian Saunders has taken out the Brancott Estate Supreme Award at the World of Wearable Art (WOW) Awards’ Show in Wellington with Supernova, as reported in Lucire.

“I had been making stage props for theatre and TV for years. WOW was the perfect challenge—could I make props for the body as well?” said Saunders.

Her winning entry Supernova was inspired “by Thierry Mugler’s Chimera dress from the autumn–winter 1997–8 collection, the iridescent spiny fins of the Hippocampus from the Percy Jackson movie The Sea of Monsters, and some incredible NASA images taken by the Hubble Telescope,” she said.

“Once all these elements were combined, Supernova was brought to life. The large gems represent new stars being born and the dark shadows represent deep space. Each scale has been individually cut, shaded with marker pens and then hand-sewn on to the garment. Each gem has had its sticky backing removed and then glued on by hand,” she said.

Gillian Saunders was born in England. She was trained in Yorkshire, and went on to Christchurch, New Zealand, where she worked as a props’ maker for the Court Theatre.