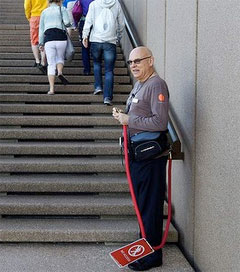 Former radio announcer and television reporter New Zealander Bruce Barnett, 62, is now a tour guide at the Sydney Opera House, and this week his job features in the WA Today column, “On the Clock.”

Just before eight o’clock in the morning, Barnett “changes into his brown uniform as one of more than 60 Opera House tour guides … [Barnett] who has lived in Sydney 35 years, considers himself a storyteller. His bass voice, when not in song in the Sydney Gay & Lesbian Choir, weaves anecdotes in an amiable interaction with tourists. ‘This work keeps you mentally alert,’ [he] says.”

At eleven o’clock, “Beside a Judy Cassab painting of the late Dame Joan Sutherland, Barnett tells a story of how the diva turned up still wearing her big stage hair when he once interviewed her on a morning radio show.”

After his shift, “Back in his own yellow shirt and trilby, Barnett heads to the Circular Quay bus stop, taking one last look behind him at the Opera House: ‘God, it’s spectacular.’”