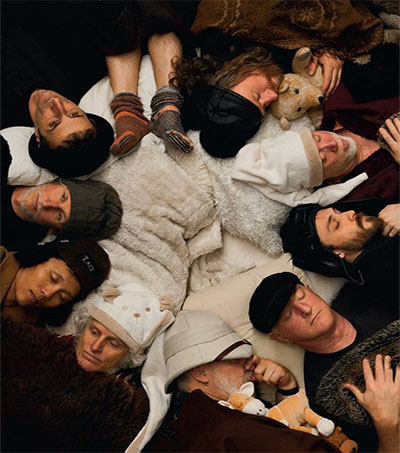 Stephen Taberner’s Choir a Bit on the Spooky Side

“It takes a rare skill to be very silly, thoughtful, and sing in perfect harmony, but the Spooky Men’s Chorale manage to achieve just that,” Denselow writes. “Dressed in black and sporting a ridiculous range of headgear, this 16-man Australian choir look like a mildly deranged gang of construction workers, colonial governors and pirates.

“They’re led by the talkative Taberner [who also writes much of their material].

“Mixing deadpan comedy with sophisticated a capella vocals, the group began with songs dealing with anything from breakfast, to feet, to the male psyche, finishing the first set with an anthem about mechanical appliances, Don’t Stand Between a Man and His Tool.

“The Spooky Men are not exactly traditionalists, putting it mildly, but have become cult heroes at folk festivals and were joined for the encore of a tender treatment of Leonard Cohen’s Dance Me to the End of Love by three rising folk stars who had opened the concert, including Kirsty Bromley and the inventive Australian Jenny M Thomas, who had earlier provided an edgy and political treatment of Waltzing Matilda.”