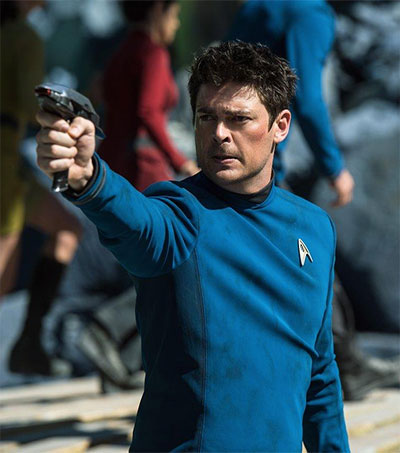 A perk of working for producer J.J. Abrams on Star Trek Beyond was the chance for Wellington-born actor Karl Urban, 44, to visit his boss’ other set. And for Urban, a lifelong Harrison Ford fan that meant watching his idol onboard the Millennium Falcon on the set of Star Wars: The Force Awakens, the New York Daily News reports.

Urban may be an action star in his own right, but he backed out of confessing to Ford that he actually named one his own sons after Indiana Jones.

A cast of relatively unknown actors are boldly going where others have gone before – into the roles of pop culture icons made famous with the original 1960s Star Trek.

Urban is now an idol to many of his fellow geeks with films like The Lord of the Rings, The Bourne Identity, Dredd and the upcoming Thor: Ragnarok, directed by fellow New Zealander Taika Waititi.

It was easy for Urban because he grew up watching Kelley on the original Star Trek. That’s also why he makes time for fans at conventions.

“Without them I wouldn’t have a job, so it is important to me,” Urban says. “At the end of the day, we are all, myself included fans of films.”