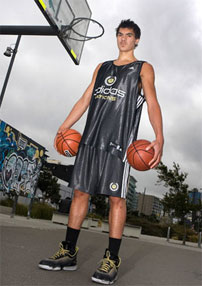 Standing Out on Court

New Zealand high school basketball player 2.15m- (7 feet 1 inch) Steven Adams, who plays for Notre Dame Prep in Baltimore, is one of the top-ranked players in the Class of 2012 (No. 6 in the ESPNU 100 recruiting database) and “won’t be flying under the radar much longer”, according to ESPNHS reporter Mike Grimala. “Even among the best high school players in the country, Adams is sure to stand out on the court because of his style of play. An uncommonly well-coordinated big man, Adams runs the floor like a guard and has the skill to score in a variety of ways, but he chooses to focus on post defense and rebounding. Last year, he played for the Wellington Saints and helped them to a championship.”