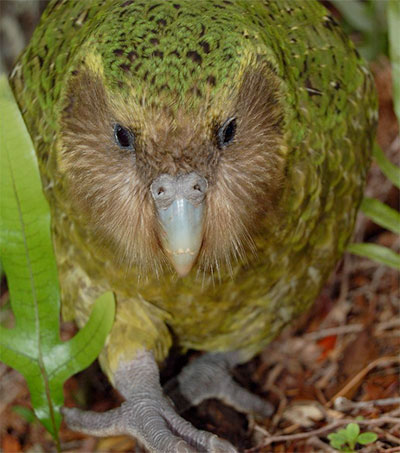 Sirocco the kakapo is a great spokesbird to travel New Zealand and share the conservation message, according to James Russell from the University of Auckland, who recently met the hand-raised bird.

“The kakapo is an emblematic species for New Zealand conservation, and typifying island conservation. The species displays all the hallmarks of island adaptation – flightlessness and gigantism, and on top of that being nocturnal and lek breeding,” Russell says.

“This was my second encounter with Sirocco having been lucky enough to see him on his first ‘rock star tour’ on Ulva Island in August 2006. Sirocco’s unique character has led to many misadventures, such as his infamous mating attempt with zoologist Mark Carwardine while filming a documentary.

“For this current sojourn Sirocco was staying at Maungatautari mainland island, and the eco-sanctuary put on an amazing immersive experience including a theatrical introduction by Richard Henry ‘himself’, one of the first island conservationists in New Zealand.”

There are fewer than 150 kakapo left in the world. It is possibly the planet’s oldest living bird.