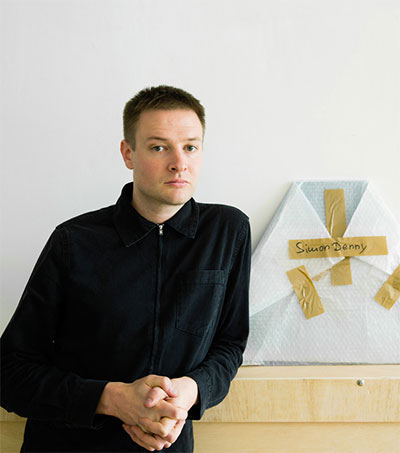 Simon Denny Weighs in on Blockchain and Art

From verification tools for provenance and authenticity to new approaches to art collecting and even new art forms, blockchain’s impact on the art world is already undeniable. During this year’s Art Basel Conversations, journalist Tim Schneider sat down with, amongst other experts on the subject, New Zealand artist Simon Denny.

One of the art market’s greatest challenges for works where the artist is no longer alive is to verify its authenticity and provenance. In a 2014 report, The Fine Arts Expert Institute (FAEI) in Geneva stated that over 50 per cent of the artworks it had examined were either forged or not attributed to the correct artist. Blockchain could change this.

As a public, decentralised list of records that are linked and secured using cryptography, blockchain’s key feature is its fragmented nature. Hosted by millions of computers simultaneously, no centralised version of the information exists for a hacker to access or corrupt. Thus blockchain is currently believed to be the most secure way to transfer digital data.

Blockchain has become part of artists’ practice, both as subject and medium. There is a nascent blockchain art movement from bitcoin graffiti art to artworks such as The Last Bitcoin Supper by French artist Youl, which sold for nearly US$3,000 on eBay in 2014. The likes of Denny have examined blockchain and cryptocurrency as a subject for years.

If blockchain’s value in terms of authentication and value preservation appears indubitable, the commodity-driven approach it has brought to the forth remains problematic. “So much of the interest in art and blockchain seems to be coming from people who, as far as I can tell, aren’t that interested in art,” Denny said. “They are really just interested in the idea of finding another way to make money.”

The art world is in the early stages of applying blockchain. Denny referred to the report Art Market 2.0 – Blockchain and the Financialisation in Visual Arts, which notes how the current status of blockchain in the art world is similar to the internet in 1993. Will blockchain ultimately benefit art in the broader sense? The jury is still out.