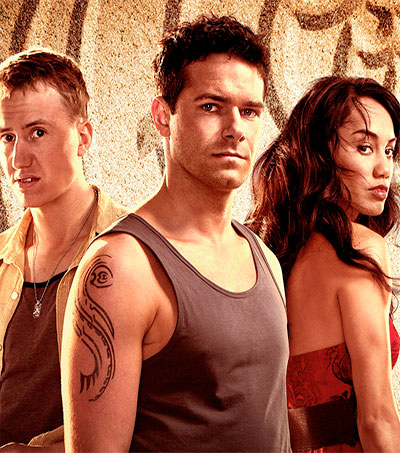 Like many of the cast of BBC3’s new supernatural thriller Tatau, Shushila Takao is a New Zealander. She stars alongside British newcomers Joe Layton and Theo Barklem-Biggs as Aumea in the television series, which is set in the Cook Islands.

Asked what it was like to film in the Pacific, Takao said: “It’s my first time in the Cook Islands but I’ve always wanted to come. I’m French-Indian-Maori but I’m closer to the Maori side of my family. They were all very proud when I got the part.

And on pretending Auckland was the Cook Islands: “Oh my gosh, it was cold. It was freezing, it was muddy; it rained. The night shoots in our togs were especially … interesting. Between takes the costume ladies come to our rescue with coats lined with heat packs. Now of course we’re on a beautiful island and we’re like ‘I can’t bear the heat!’ and paddle in the sea between takes to cool down.”

The series has received favourable reviews in the UK with the Independent predicting Tatau “might be a gap year worth following,” and the Guardian calling it a “young person’s Death in Paradise by way of True Detective.”

“Tatau is pacy, engaging and more than happy to get its weird on, so it looks worth sticking with,” Dan Martin writes for the newspaper.