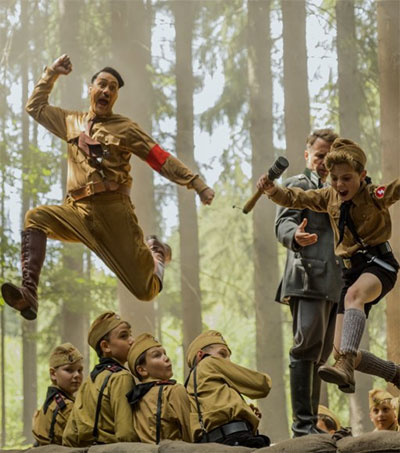 “Unlikely though it sounds, we have a need to laugh at Adolf Hitler, on the movie screen if nowhere else,” Turan writes for the Times.

“Some of our greatest comedy directors, from Charles Chaplin (The Great Dictator) to Ernst Lubitsch (the brilliant To Be or Not to Be) to Mel Brooks (The Producers), have used der Führer as a figure of fun, trying, perhaps, to make a monster more manageable by having a laugh at his expense.

“Writer-director Waititi’s Jojo Rabbit, the latest example of this resilient trend, shows both the pleasures and the limits of a seriously off-the-wall idea.

“Erratic but engaging, going in and out of daring, the film’s mixture of black humour and unashamed sentimentality is not always as good as its best parts.

“But those parts, like playing the Beatles singing ‘I Want to Hold Your Hand’ in German over worshipful Hitler footage from ‘Triumph of the Will’, will definitely make you shake your head and smile.

“Though ‘Jojo’ is inspired by Caging Skies, a novel by Christine Leunens, the spirit of the film undeniably comes from fellow New Zealander Waititi, whose antic, unclassifiable sense of humour has enlivened everything from the low-budget indie Hunt for the Wilderpeople to the massive Marvel tentpole Thor: Ragnarok.

“Because Waititi knows just how to play the fantasy Hitler he created (the character is not in the novel), he’s the best thing about Jojo Rabbit, so much so that when his manic sensibility leaves the screen he is very much missed.

“If Jojo Rabbit doesn’t finally hold together as we’d like it to, it has attempted so much and been so completely its own film that begrudging it good wishes feels not really fair. And if it drives viewers to take a chance on ‘To Be or Not to Be’ or even ‘Tito and Me’, so much the better.”