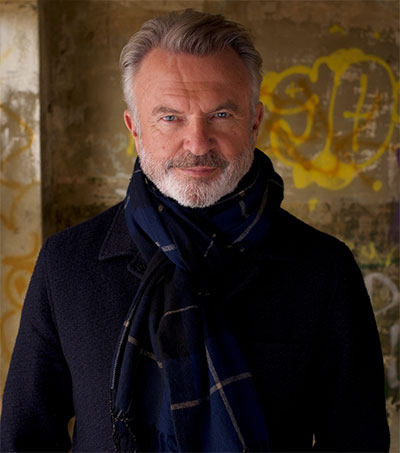 When Sam Neill first stepped in front of a camera on a movie set he had no idea he was launching a career that would span five decades and take him around the world, Karl Quinn writes for The Sydney Morning Herald.

“It was slim pickings in those days,” Neil says of his starring role in Roger Donaldson’s 1977 thriller Sleeping Dogs, the first feature film that had been made in New Zealand in more than 20 years.

Nowadays, Neil can lay claim to more than 130 credits in film and television, including the Jurassic Park franchise, a handful of Emmy and Golden Globe nominations, a best actor Logie for Jessica in 2005, and an AFI award as best actor for his role as Michael Chamberlain in Fred Schepisi’s Evil Angels in 1989.

And on 4 December in Sydney, he’ll have another one for the mantelpiece, as he is presented with the Australian Academy of Cinema and Television Arts Award’s (AACTA’s) Longford Lyell statuette for outstanding contribution to the Australian screen industry, described by the academy as “Australia’s highest screen accolade”.

“It’s very nice of people to think of one at all, let alone to give you an award for hanging around long enough,” the 72-year-old actor, producer and winemaker says. “You might want to call them and see if they’ve made a mistake, though, given I’m a New Zealander.”

Neill is an advocate for creatives who’ve been lured overseas remaining loyal to their roots, and giving back whenever they can.

“Hollywood is a great drain of talent, and I do encourage that talent to come back from time to time and reinvest in Australian cinema,” he says.

“It’s very important for any country that it has its own culture, its own painters and poets and filmmakers and actors. No country is worth a damn without its own culture.”