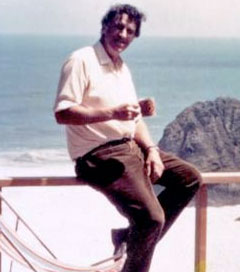 Sir Edmund Hillary’s daughter, Sarah reflects on the area in New Zealand – along the wild coast of the Waitakere Ranges – where the mountaineer found refuge, from the attention that followed his conquest of Mount Everest. “The Hillary Trail, which opened three years ago in my father’s memory, threads through a part of the world my family has known for generations. I have been going to the area, not far west of Auckland, for as long as I can remember. It was an ideal holiday for him, a place where he could switch off. One photo epitomises it for me: that of him outside on the deck with a cup of tea looking very casual, the sea and the cliffs in the distance below. My father used to do a lot of writing and expedition planning there and when we had overseas guests, they would go to the beach house. Tenzing Norgay and his wife visited when they came to New Zealand more than 40 years ago. My father’s favourite part of the coastline was the wonderfully remote stretch between Whites and Anawhata beaches. There’s also another story that my father sent the telegram to announce his conquest of Everest to Piha, the nearest place to our holiday home, rather than to Auckland. Sixty years on from that expedition, I feel honoured that people are still celebrating its achievements.”