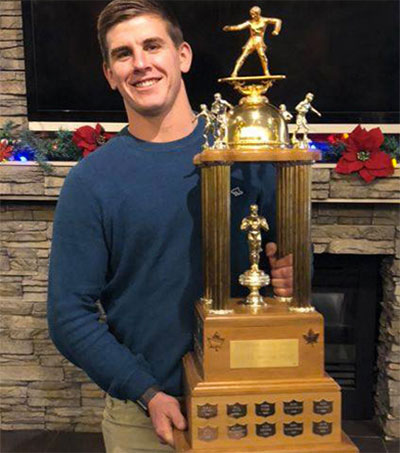 New Zealander Jordan Roberts’ play on the pitch for the St. Albert Rugby Football Club (SARFC) spoke volumes as the modest and unassuming captain of the Labatt’s Cup provincial champions was honoured as this year’s most valuable player in the Edmonton Rugby Union and Rugby Alberta, in Canada.

“I don’t really know what to say,” Roberts, 26, replied when asked to sum up the multiple MVP accolades. “It’s good. Unexpected but good.”

“It’s always nice to get a personal award in a league after a hard season,” said Roberts, a standout at eight-man for SARFC, and originally from Blenheim.

“I just tried to do everything I could well, like my basic roles like captain,” Roberts said.

Roberts was also fêted by Rugby Alberta as its top male performer. “Again, it was unexpected but that was great,” said Roberts, who was presented with the Rugby Alberta certificate of merit.

As for his strengths as a rugby player, Roberts said: “I think I’ve got a good work ethic around the pitch so my fitness is good. I can get around the pitch for 80 minutes, which is good in a summer rugby league like this. Summer rugby is hard and fast so you’ve got to be fit to keep up otherwise you get left behind.”