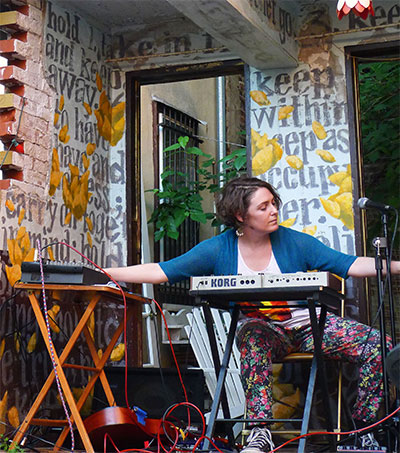 Composer and musician New Zealander Rosie Langabeer, who will perform as Diamond Blazer at the Double Decker Music series in Philadelphia where she lives, has also been working with esteemed American ballet choreographer Matthew Neenan on “Sunset, o639 Hours”, about pilot Captain Edwin Musick.

The work, performed by Philadelphia company BalletX to rave reviews, came about through a collaboration with Langabeer. They so enjoyed working with each other on a commission that they wanted to discover something together. She wanted a story that linked New Zealand and American culture. It was she who happened upon the Captain Musick tale.

Neenan spent a month with her in New Zealand, and rehearsals in Philadelphia lasted seven weeks, much longer than the gestation period usual for his freelance work.

“We knew we had a lot to play with,” Neenan recalled. “The letters, New Zealand, Hawaii, Samoa, the floating cabarets of the ‘30s. We could tell the story in an abstract way, with fantasy. And the captain appealed to me. He was a humble guy.”

Langabeer’s contribution is crucial to the work’s evocation of period, place and dream. She and three other musicians play onstage, sometimes on eccentric electronic instruments invented by Neil Feather. It all supports Neenan’s choreographic fantasy: dancers as plane parts and passengers, crewmen and islanders, birds and letter writers, the missing and those who miss them.

The Double Decker Music series is a unique, intimate mobile concert experience on an open-top double-decker bus. It features live performances in an urban setting paired with a guided tour of Philadelphia’s attractions.

Langabeer performs as Diamond Blazer on 23 August. The show is sold-out.