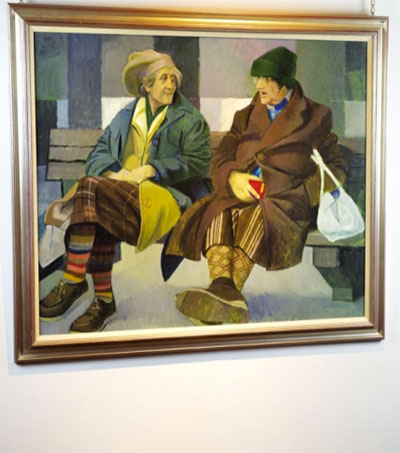 When Auckland artist Ron Stenberg launched an appeal to discover the identities of two people in a £100,000 painting he donated to one of Scotland’s leading art galleries he had no idea what a remarkable tale would emerge.

Stenberg’s painting Two Auld Wifies, Dundee (1982), now on display at The McManus art gallery and museum in Dundee after being shipped from his home in New Zealand in August, was believed to depict a couple of old friends sitting chatting on a bench near the City Square where they met every Friday afternoon.

But after the story appeared in Scotland on Sunday, Susan Keracher, art curator at The McManus, was informed that the woman on the left of the picture was Janet Isles-Denny, one of Dundee’s wealthiest women who decreed in her will that her vast fortune be left in trust to promote the arts, heritage and disadvantaged in Dundee.

Furthermore, the “friend” sitting beside her was in fact her son Alexander who had learning difficulties and was a long-term resident at the Royal Dundee Liff Hospital.

Stenberg had inadvertently captured Isles-Denny enjoying time with her son on one of his excursions out of the hospital.

Keracher said the painting revealed “a poignant story of the enduring love of a mother for her child”.

Alexander died a few years after the painting was completed and Isles-Denny died in 2008, aged 101.

A spokeswoman for Stenberg, 96, who painted the work when he was a lecturer at the Duncan of Jordanstone College of Art in the city, said: “Mr Stenberg is absolutely delighted. He thinks this turn of events is incredible. He cannot believe that this painting which has hung in his home and has starred in exhibitions, including one in New York where a collector of Scottish art offered him £100,000 for it, had such a life of its own.”