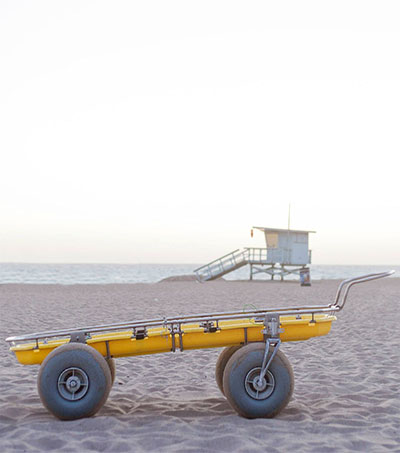 “With Schlags’ real-world rescue insight, Butler brought years of engineering expertise and knowledge to develop this ergonomically excellent device, which can be pulled by hand or towed by an ATV or other vehicle and manoeuvered through tight spaces on a crowded beach,” Santa Barbara Independent reporter Chuck Graham writes.

“It’s aimed at all sorts of rescue situations, but it also works for moving firefighting or any heavy equipment over rough grounds.

“With a sturdy, lightweight, stainless-steel frame, its durable basket lets victims lie down and relax while being transported down the beach. The large caster wheels make an enormous difference for [transporting] cart victims through soft sand or over cobblestones, and also help keep sand out of wound[s]. Expect to see it on more beaches near you.”

Butler has been building Ford-powered Cobra replicas for 10 years and has sold 60. He is the former crew chief on the American racing team of designer-driver Carroll Shelby who built the original Ford Shelby Cobras.

Butler has been awarded “Master Race Car Fabricator” by Hot Rod Magazine and has also been listed in the Sturtevant Hall of Fame as one of the world’s greatest mechanics.