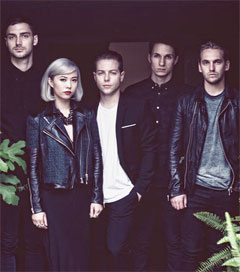 Rolling out Their Second Album from LA

“That side of living in Los Angeles is actually pretty fun,” Powers says.

“You feel like you’re at a theme park all the time.”

The Naked and Famous began work on the follow-up to their highly acclaimed 2010 debut Passive Me, Aggressive You in a flashy facility in the celebrity-bejewelled neighbourhood of Studio City before moving over to the more modest Bedrock Studios.

“It’s a good environment and feels more real,” Powers says. “Makes us feel like we’re the same band we were four years ago when we had to pay $60 to hire out a place for three hours, lug all our gear over and then drive it home to mum’s house afterwards.”

In Rolling Waves is out now in Australia. The Naked and Famous play the Big Day Out at Claremont Showground on 2 February.