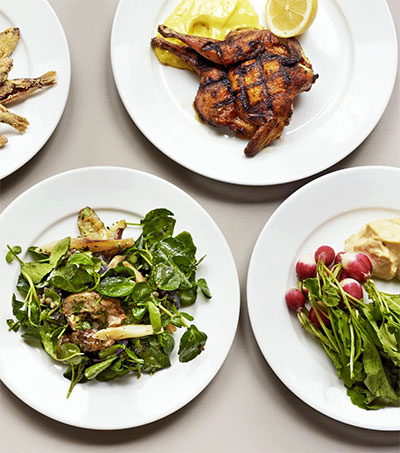 In October 2017, New Zealander Margot Henderson and her British business partner Melanie Arnold, proprietors of Rochelle Canteen in the Shoreditch neighbourhood of East London, set up a second outpost on the ground floor of the Institute of Contemporary Arts (ICA). “A five-minute walk from Trafalgar Square, this is an area more propitious for genteel private clubs than for decent restaurants serving the general public,” according to New York Times reviewer Edward Schneider.

“[Margot] Henderson is married to Fergus Henderson, founder of the influential London restaurant St. John, who was leading the charge on nose-to-tail eating long before it became a cliché,” Schneider writes. “The kinship between the two restaurants is easy to see at the new Rochelle Canteen – in the calculated plainness of its mostly white, somewhat ramshackle décor, and in the language employed on the ever-changing menu, whose terseness cannot mask the food’s appeal.

“Henderson said it was ‘time our galleries took their food as seriously as they take their art.’

“The words ‘Guinea Fowl & Smoked Bacon Pie,’ for example, could hardly be simpler, but who (other than a vegetarian) could resist them? It was a wonderful and surprisingly light dish, with a perfectly crisp and golden suet crust laid over tender breast and leg meat braised in a flavourful broth that also served as the pie’s poultry-and-bacon-scented sauce.”

“Rochelle ICA will delight you,” Schneider writes, “if you’re content with imaginative, delicious food served in an easygoing atmosphere with its own quirky style.”

Henderson is originally from Wellington.