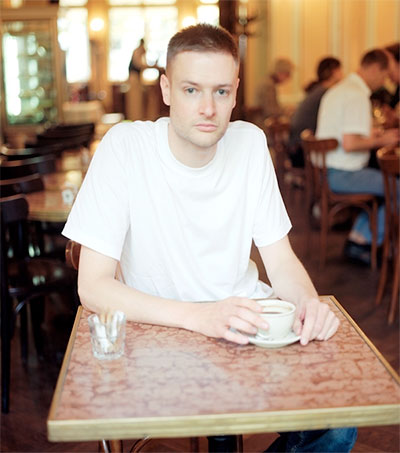 New Zealand–born, Berlin-based Simon Denny, who is represented by one of New York’s most reputable galleries, Petzel, has opened his first American show “The Innovator’s Dilemma” at MoMA PS1. In May Denny will also represent New Zealand at the Venice Biennale.

Many artists in his generation explore the social and cultural implications of changing technology. Denny belongs in this group, but he goes deeper than most, researching how corporations and individuals consciously look to design devices that alter our understanding and experience of the world.

Denny’s MoMA PS1 show features six past major installations presented as a tech trade show. Among the show’s objects, visitors will spot canvases from his show All You Need is Data chronicling the 2012 Digital-Life-Design conference in Munich, a Colin Christian cyborg face from The Personal Effects of Kim Dotcom, the stage set of his TEDx Vaduz conference in Lichtenstein, and even early canvas works exploring television set sizes.

Denny told artnet News that his interest in technology started when he moved from New Zealand to Frankfurt in 2007, the year the iPhone was introduced.

“At the time I was making physical abstract work, I was interested in Arte Povera. But then I was finding my phenomenological experience was with tech primarily. It was where my home was, it was like my life-line,” he said.

Denny describes his obsession with Samsung as peculiar, he knows, but indicative of how technology, business, society and culture are so intertwined.

“They [Samsung] have practices implemented that one could question but there is also an amazing achievement, an interesting momentum, and a definite culture force. Good or bad, these things have an impact on culture. You can’t choose your culture, it sort of chooses you. Samsung chose me, I’m a fan of Samsung, I’m a user of it. It has a founding story, it has a cultural history, and nobody was telling it in my world.”

“The Innovator’s Dilemma” is on through 7 September.