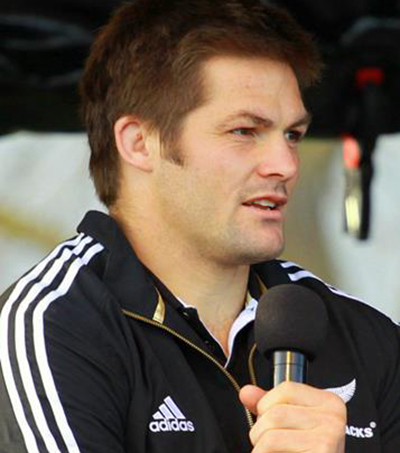 Richie McCaw: The Man Behind The Genius

“What makes the New Zealand captain the world’s greatest player?” asks The Telegraph in a lengthy feature article.

At Twickenham on Saturday, Richie McCaw eclipsed Sir Colin Meads as the most capped player ever to wear the silver fern, with a 134th international appearance that takes him within six of Brian O’Driscoll’s all-time Test record.

Although Sir Ian McGeechan claims that Meads’ late Sixties vintage constituted the greatest New Zealand side he has ever seen, the feats of McCaw are eye-watering, reports The Telegraph: he guided his nation to their 2011 World Cup triumph with multiple fractures in his foot, rebounded from a self-enforced sabbatical to inspire last year’s perfect season of 14 straight victories, and all the while preserved his distinction as the only man ever to win the International Rugby Board’s player of the year award three times.

He is the game’s imperishable totem.

Fundamentally, McCaw has forged a team in his own image.

He is hewn from resilient rural stock, having discovered early that his home village of Kurow, a South Island community of only 340 souls, was “not the kind of place where you could hide”.

Cast your gaze across McCaw’s most celebrated team-mates, and almost all of them trace their origins back to the same small-town environment.

Kieran Read, the fearsome No8 to whom McCaw briefly leased the title of the world’s finest player, hails from the sleepy outpost of Drury, while Southbridge superstar Dan Carter has always been scrupulous in honouring the unspoken compact between an All Black and his roots, devoting much energy to the rebuilding efforts in nearby Christchurch since the 2010 earthquake.

It says much about McCaw’s make-up that the virtues he esteems most highly are honesty, selflessness, and an absence of affectation.

“The biggest thing I’ve tried is to be myself,” he said, when he took over from Tana Umaga as captain. “You don’t want to put on a different persona to show people you’re a really nice fellow, and yet you’re a punk.”

Larry Williams, the influential New Zealand radio presenter who has closely followed the life and times of McCaw, is quoted by The Telegraph saying: “Richie just conducts himself impeccably. He has never put a foot wrong. He is on first-name terms with our Prime Minister, John Key, and he was going to be knighted at the end of the World Cup, only to turn it down on the grounds that it would have been inappropriate while he was still playing.”

This quest for perfection can drive him to the brink of breakdown. Not in the Jonny Wilkinson sense of psychological turmoil, but purely in terms of the physical pounding he endures.

The best defence to those daring to second-guess a great was given by Fred Allen, the ex-All Blacks captain and another product of North Otago, who would say: “Just look at the b—– record.”

Herein, perhaps, lies the secret of his genius: that he can defy the tangible limitations of age, not least his loss of pace, to exert just as much influence as he ever did.

McCaw’s unexpected renaissance this year has even sparked a debate among his disciples as to whether he is more valuable now to the All Blacks than in his prime.

“McCaw is their anchor, their pillar, their mainstay. He might have narrowly missed out on the Rhodes scholarship (to go to Oxford), an award specifically instituted to develop outstanding leaders, but instead he has risen to greatness entirely on his own terms,” concludes The Telegraph.