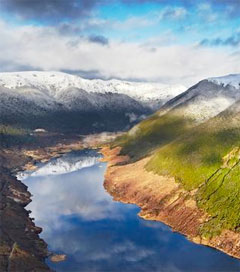 “In New Zealand, there is a peculiar clarity to the sunlight,” Lonely Plant traveller Alex Von Tunzelmann writes for the BBC. “Highlights blaze; shadows are cast very, very dark. The effect makes the grass that covers the hills of North Island appear greener than grass anywhere else in the world. When director Peter Jackson decided to set The Lord of the Rings films in New Zealand, he knew that his native land could provide landscapes so spectacular that in many cases they would need little camera trickery to become the fantastical Middle-earth locations described by JRR Tolkien. Kahurangi National Park, one million acres of snowcapped peaks, rainforest creeks and sandy beaches on the remote northwest edge of South Island, is South of Rivendell. It is Mount Olympus, Dimrill Dale.”

Tags: BBC News  Lord of the Rings (The)  Peter Jackson