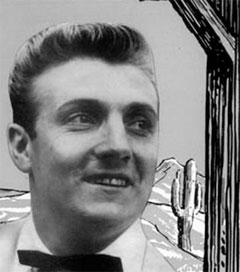 The life of Houston Wells, sixties country singer, is celebrated in the Independent this month. Wells, born Andrew Smith in 1932 north of Newcastle upon Tyne, lived on the shores of Lake Taupo until his death on 28 December 2013, aged 73.

Smith was best known for his recordings with the band, Houston Wells and the Marksmen. Under manager Terry McGrath, Wells was placed under the maverick producer Joe Meek – named one of NME’s 50 Greatest Producers ever – who worked with Tom Jones and Shirley Bassey.

Houston Wells and the Marksmen were regularly on tour, firstly on beat shows and then working with such country legends such as Jim Reeves, Hank Locklin and Johnny Cash.

The group’s third single, Only the Heartaches made it into the UK singles Top 30 in August 1963. The band also enjoyed Top Ten hits in Ireland.

Although Houston Wells and the Marksmen was the UK’s top country band it was not lucrative, and he moved to Ireland and worked with a showband, the Premier Aces.

“I was struggling in England as country music was a hard sell back then,” Smith said. “I was offered a job in a showband working around Ireland and it was regular money. I battled on for some time but I was replacing band members as their wives didn’t like them being away from home. It became ridiculous so I folded up the band and moved to New Zealand [in 1974].”

Smith’s hobby was shooting and he was part of the New Zealand team for the World Sporting Championships in 1996.