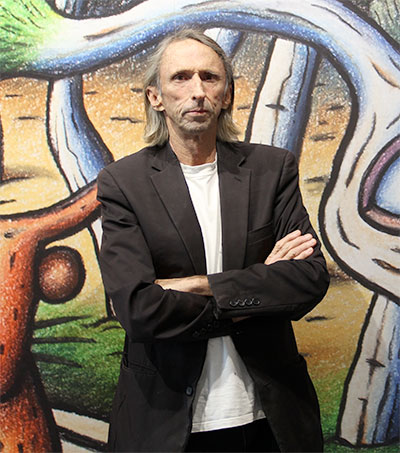 Auckland-born artist and musician Reg Mombassa’s works dominate the “Mambo: 30 Years of Shelf-Indulgence” exhibition on at the newly opened aMBUSH Gallery in Sydney.

His art is now a part of the Australian landscape, represented in major galleries and events. Mombassa was commissioned to produce designs for the athletes’ uniforms and artworks for the Closing Ceremony of the 2000 Sydney Olympics. He was also appointed artistic director for Sydney’s 2013 New Year’s Eve celebrations, producing banners, lights and a massive eye, which glowed from the Sydney Harbour Bridge throughout the fireworks display.

Interested in graphics and comic book art as a young boy growing up in New Zealand, and a graduate of the National Art School in Sydney, Mambo was the perfect creative vehicle for Mombassa, real name Chris O’Doherty, a founding member of the band Mental As Anything.

“It was very energetic, lots of interesting artists and good people to work with,” he said. Most importantly it was also creatively free in terms of producing work.

“There were no guidelines, no direction,” he recalled, “That’s why I liked it!”

Much of his recent artwork is drawn from road trips, shots and glimpses seen from the car. Even the F3 motorway is a feature: “I think it is a major sculpture,” he says.

When not playing in his band Dog Trumpet and not fulfilling demands for his quirky artworks, Mombassa is focused on landscape painting and drawing. Influenced by the modern movements, including Impressionism, Fauvism and Expressionism, his works are in demand and he is in preparation for an upcoming exhibition at Sydney.