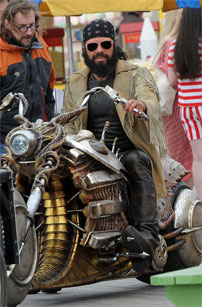 The other half of comedy duo Flight of the Conchords Jemaine Clement’s “delightfully bizarre taste in costumes carries on,” Huffington Post correspondent Jordan Zakarin writes, describing Clement’s latest get-up for his role as the evil Boris in Men in Black III. “Following the New Zealand songster/actor’s nutty, bearded professor turn in 2009’s Gentleman Broncos, he’s going even more heavy on the facial coif. Though Clement was quite lovable in Conchords, he says he’s enjoying playing a bad guy. ‘I’m 90 per cent evil in real life,’ Clement said. ‘It’s hard to be nice most of the time when I’m only 10 percent good.’” Men in Black III hits American theatres on 25 May. Originally from Masterton, Clement, 37, was the voice of parrot Nigel in 2011’s computer-animated Rio: The Movie.