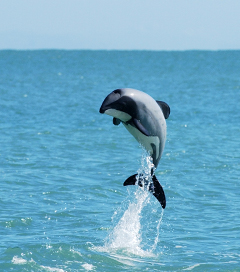 With only 55 adults remaining, experts fear Maui’s dolphin will disappear entirely within the next 17 years unless urgent action is taken.  An expert panel was appointed by the New Zealand government last year to investigate state of the Maui’s dolphin population and propose ways to help bring the species back from the brink of extinction. The rarest dolphin in the world, it is estimated that five of the dolphins are killed annually as fishing industry by-catch – usually by entanglement in gill nets. Some restrictions on gill netting and trawling in the dolphin’s known habitat were introduced last year, however it is examining the potential impact of an extended ban on the local fishing industry before making further restrictions. The local fishing industry disputes allegations that they are to blame for the dolphin’s demise, citing that there has only been one confirmed by-catch fatality in the past 25 years and that may have been a Hector’s dolphin, a close relative of Maui’s dolphin.