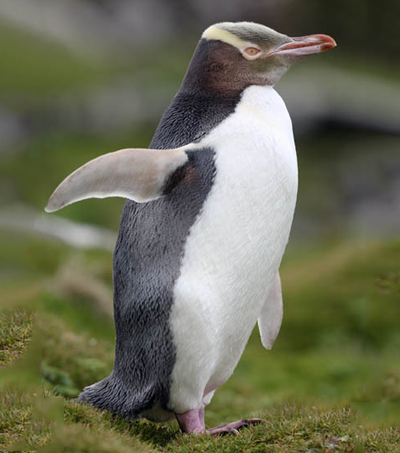 Though its figure—with its striking eyes and signature colored band across its head—adorns New Zealand’s five-dollar bill, the yellow-eyed penguin is severely endangered. Just 2,000 of the flightless birds are alive today, down from 6,000 a decade ago, making the Megadyptes antipodes the world’s rarest species of penguin.

As Marcel Haenen reports in The New York Times, New Zealand’s yellow-eyed penguins, which live in the impenetrable forest hills that hug the country’s South Island beaches, lurk under canopies of thick shrubs, trees, and branches. They’re also very shy—dashing for places to hide as soon as people approach. Standing just over two-feet tall, the yellow-eyed penguin can fall prey to ferrets, stoats, rats, cats, and dogs, and also is known to suffer from heat stress and avian diphtheria (which can cause mouth ulcers that make it difficult for the birds to eat and breathe).

Containing 166 areas of native forest and an impressive waterfall, Te Rere Penguin Reserve was founded in 1989 by Forest & Bird, the largest privately owned conservation organization in New Zealand. Conservationists hope that the New Zealand government will take further measures to preserve the country’s penguin population, because the penguins help draw tourists. “Ecotourism is big business,” longtime Te Rere caretaker Fergus Sutherland told the Times. “Penguins are bringing in good income in this region. It is only reasonable to allocate more funds for the protection of the yellow-eyed penguin at this dramatic point in their lives.” With luck and good care, one day New Zealand’s native penguin will be rare as a five-dollar bill!